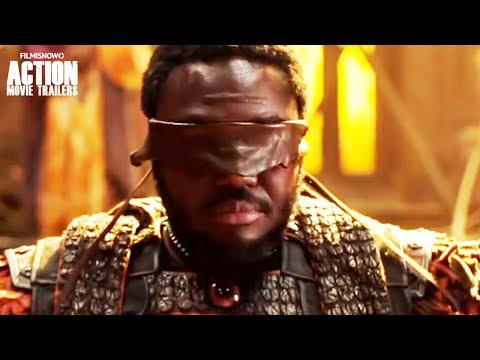 Check out the latest 'Into the Badlands' season 3 trailer!

Not long now until you can watch Leslie Kunz and Wayne Gordon, in season 3 of the hit Amazon Prime show 'Into the Badlands'. " "Into the Badlands" is a genre-bending martial arts series very loosely based on the classic Chinese tale Journey to the West. The series is set in a post-apocalyptic world approximately 500 years after a war that left civilization in ruins. In a territory known as the Badlands, the former state of Oklahoma, a feudal society has developed to fill the
19 views0 comments

Innocent Candy is a new British Feature that goes into production this year. It is written by Stefan Michaels and produced by Stacey Gough, both represented by Reflections Talent Agency. They form an equal partnership on the film and, as actors, take on the roles of “Hamilton Candy” (Stacey) and “The Bishop” (Stefan). Produced by “The Plays The Thing Theatre Company in Association with Lumino Films” The cast is made up of some award winning actors and actresses that all have
57 views0 comments

Well done to Tina Barnes who was successful with her audition and was cast in 'The Darlaston Dog Fight'. Tina will be performing in this production on the 23rd and 24th March 2018 at the Arena Theatre, Wolverhampton. 'The Darlaston Dog Fight presents the story of Rough Moey. Collier, innkeeper, hell-raiser and dog-fighter, and the last man to sell his wife in Wednesbury market. From the mines to the bloody dog-pit and bull-stake, Moey’s life is lawless, brutal and violent. Bl
22 views0 comments

We are delighted to announce that both Wayne Gordon and Daniel Singh where successful with their auditions and are working on the feature film 'Angel Has Fallen'. Starring Morgan Freeman, Gerard Butler and Jada Pinkett Smith. Once again the secret service Agent Mike Banning is framed for the attempted assassination of the President and must evade his own agency and the FBI as he tries to uncover the real threat; http://www.imdb.com/title/tt6189022/?ref_=pro_tt_visitcons Danie
86 views0 comments

Carmen Gloria USA native actress of Hispanic, Latin American ethnicity and fluent in English and Spanish and has bases in LA and NYC to use. She is also a songwriter, visual artist, filmmaker, former singer and a U.S. Army Veteran. She was born in Bronx, New York and raised mostly in Puerto Rico. At 17 years old, she joined the U.S. Army active duty for six years. After being stationed overseas and in Washington, D.C., becoming a Sergeant by the age of 21, earning a Bachel
49 views0 comments

Not long now until you can watch Wayne Gordon and Leslie Kunz in 'Into the Badlands'. Starring Daniel Wu, Orla Brady, Aramis Knight and the Directors include Paco Cabezas and Toa Fraser. We will let you know the exact air date, so you don't miss out!
16 views0 comments

Well done to Douglas Fielding who was successful in booking the role of 'Martin McMorris' in the BBC's Silent Witness. Starring Emilia Fox and Tom Ward. You can watch both parts of the episode using the link below. http://www.bbc.co.uk/programmes/b09rfjr8 Douglas Fielding is a British actor of film and television, best known for playing the role of policeman Roy Quick in the BBC soap opera EastEnders from 1985 until 1986. He had previously played another long-running role in
89 views0 comments

We are pleased to announce the exciting news that Tina Barnes can be seen on your TV screen's playing newcomer Rose on ITV's Emmerdale! Well done Tina! Tina is an experienced actress with a huge amount of experience in TV, Film and Theatre. Her first major screen appearance was in Darkhunters, a film with Dominique Pinot, released worldwide. She has previously worked in TV shows including; Doctors, The Bill and Holby City. Other credits include the short film Nightmares, whic
16 views0 comments